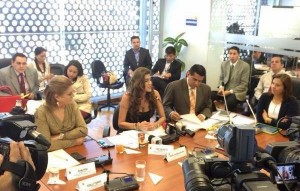 Assemblymen of the Commission on the Rights of Workers of the National Assembly who are working on the Labour Code draft, yesterday reacted over the possibility of the Executive to submit a new project, as they keep working in another one.

“The Labour Code that has absolute validity is the one sent by the President”, said the Minister of Production, Richard Espinosa. Given these statements, Assemblymen of the Commission of Workers Rights of the Assembly who transact the Labour Code draft reacted to the existence of another labor code, different to the one they are working in.

Assemblyman Fausto Cayambe (AP), said: “There are not going to be two projects of the code, that role corresponds to the Assembly, to systematize and complement”.

Assemblywoman Cristina Reyes (PSC-MG), noted that the judgment of the Executive is always imposed on the decisions because “there is no respect or trust in the work of their own Assemblymen (from AP)”.