Complaint about the Minister of Agriculture reached the Prosecutor’s Office 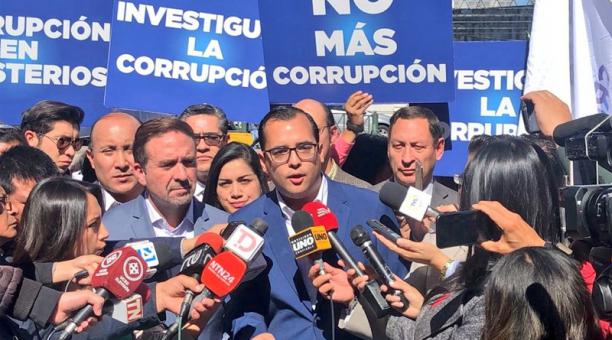 Assembly members of the Creo block filed a complaint against the Minister of Agriculture, Rubén Flores, in the Office of the Prosecutor, this Thursday, June 7, 2018. Assemblyman Héctor Yépez, with the support of the national president of the movement, César Monge, and Other members of the bloc, asked to investigate an audio and a statement issued in a conference by the official.

“It is not possible that in our country, a Minister of Agriculture makes a statement in which he tells Ecuadorians that ministries are being trafficked in exchange for millions of dollars and there is absolutely no one who makes a formal complaint to be investigated,” he said. Monge

“We are public officials to serve and not be served. There are sectors that pay USD 1.5 million for the position of Minister and they want to do things honestly “, Rubén Flores is heard saying in a video of a conference addressed to the officials of that State Portfolio, dated May. 2018. In addition, there is another audio that circulates since yesterday (June 6) in social networks, this new record also speaks of the fact.

“Yesterday, Ecuador has witnessed another additional statement, another audio, another video, it is not possible for Ecuadorians to witness how the State is used to enrich itself. There are several indications of violation of articles of the Comprehensive Criminal Code “According to Yépez and Monge, allegedly there would be the crimes of concussion, bribery, embezzlement and illicit enrichment and especially the violation of Article 277 of the Comprehensive Criminal Code (COIP).

Article 277 of the COIP states that “the person who, as a servant or public servant and as a function of his / her position, is aware of any fact that may constitute an infraction and does not immediately inform the authority, shall be punished with a private penalty of freedom from fifteen to thirty days “.

Last Tuesday, June 5, Yépez managed to get the Legislative Assembly to approve its draft resolution to request the appearance, before the 137 Assembly members, of Minister Flores. However, this did not rule out a political trial that, he said, would come after the appearance of the owner of Agriculture.

On the afternoon of Thursday, June 7, Minister Rubén Flores said that the audio circulating on social networks was manipulated and decontextualized. He also said that the Prosecutor’s Office is already investigating the incident. “In the knowledge of the audio, we decided on the follow-up strategy to be able to guarantee the due process, the investigations have to take place, they are already in charge of the Office of the Prosecutor,” he said. “Just as today, an Assemblyman has gone to the Office of the Prosecutor to consolidate the investigation process, which, well, we already did in the past weeks,” Flores added. (I)