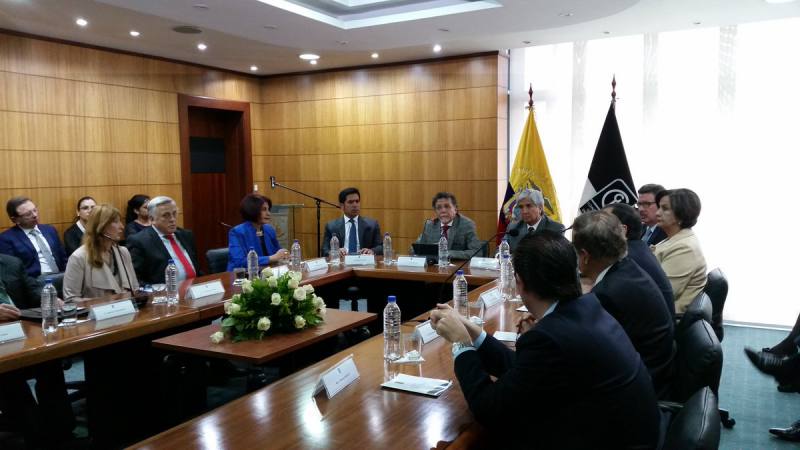 Among them is the declaration of secret and reserved documentation of debt; the operations of anticipated oil sales that was not considered debt. In addition, executive decree 1218 is investigated, in which it was arranged to take the consolidated debt as an index of the debt and not the total.

The inter-institutional agreement signed between the Ministry of Finance and EP Petroecuador is analyzed, with which it was given a role of financing manager to the company. There were also deficiencies in the documentation file.

On these issues, public officials must inform their points of view and provide documentation, within the global audit process conducted by the Comptroller.

Officials and former officials were notified in this regard; among them, the former president Rafael Correa, as president of the Debt Committee, and some former ministers of Economy and Finance.

Comptroller personnel arrived at Esmeraldas and Gómez Rendón streets, in the south center of Guayaquil, to deliver the notification to Correa.

There the former president maintained a meeting with assembled allies, but did not receive the notification personally; In his place was his private lawyer, Alexis Mera, former legal secretary in the Presidency.

Correa assured that everything is about a political persecution and that they seek to distract him from the electoral campaign.

The audit was released on Monday after the announcement of the creation of a citizen oversight of experts. There are the ex-comptrollers Marcelo Merlo and Alfredo Corral; the economic experts Ramiro Crespo and León Roldós; Eduardo Valencia, of the Investigating Commission of the Financial Crisis; and the ex-prosecutor Mariana Yépez.

Comptroller Celi said that these will provide critical analysis of the subject and even complementary information.

Eduardo Valencia considered that the oil pre-sale is a debt and regretted that oil resources are committed until 2024.

And he considered that he sought to evade the constitutional limit of the same, taking into account only the consolidated. For the expert, the present and the future of the country were put at risk. (I)