Comptroller will review the water contract 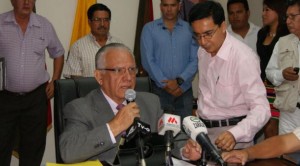 The lack of drinking water, the increase in the price of the private tankers and the collection of payroll without receiving the service generate claims of the inhabitants of Santo Domingo. In response, the Mayor Víctor Manuel Quirola announced that he will ask the General Comptroller of the State to review the contract signed by the previous administration with a Korean company for $43 ‘ 600.000, because said that the work is unfinished.

Pedro Suntaxi, exadministrador contract, explained that this culminated on 28 March, but a 30-day extension was given for sectors not referred to be attend and added that there is a period of 6 months to make corrections.