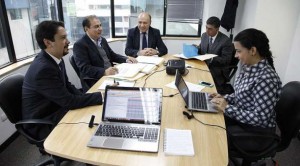 The workers sector said they are willing to lower their initial proposal to increase the Unified Basic Salary (SBU for its Spanish acronym) for 2015, in the case that employers also make flexible their position, said Jaime Arciniega, chief of the labor sector before the Conades.

The Conades expects today in Quito, try for the second time, an agreement on the new SBU for 2015.

“To think that employers, by effects of oil prices must only adjust the workers more, is no fair,” said Arciniega, indicating that this sector could lose its proposal to $ 37.4.

If there is an absence of consensus after the meeting today, the Ministry of Labor Relations will decide the rise.