Conaie will participate on march against government policies

On Wednesday the president of the Confederation of Indigenous Nationalities of Ecuador (Conaie for its Spanish acronym), Jorge Herrera, reaffirmed its “unity” with the unions and said that they will take part during the demonstration of workers scheduled for next September 17.

The Indigenous leadership also stressed that they will reject the decision of the Constitutional Court (CC) on the application of indigenous justice, which was issued by the case of La Cocha and notes that communities may claim for knowledge of the crimes within their jurisdiction, except those related to an attempt on life, which are to be attended by the ordinary courts, said the CC, applying the principle of multiculturalism.

Indigenous leaders say they will not abide by the decision of the CC because it “violates Article 171 of the Constitution and 169 of the International Labour Organization (ILO).” 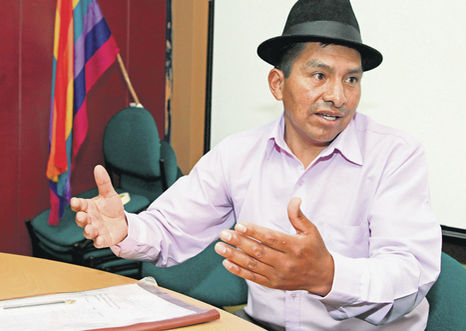 Jorge Herrera, head of the Conaie.

20% of motocycle pieces and parts shall be national until 2015