Confirms marriage between George Clooney and Amal Alamuddin in Venice 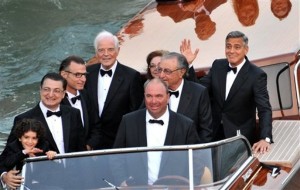 George Clooney’s representative confirmed on Saturday September 27 that the actor has been married with human rights Lawyer Amal Alamuddin in Venice. The couple was united in marriage one day after arriving with some celebrity friends to the romantic Italian city.

Outside the Hotel Cipriani, photographers were gathered in boats trying to capture an image of the artist. After someone yelled “this is really happening, George” the actor saw his wristwatch and said, “Yes, right now.”

Clooney was followed by a flotilla of photographers to the hotel where he married.

George Clooney and her fiancee arrive to Venice for their wedding