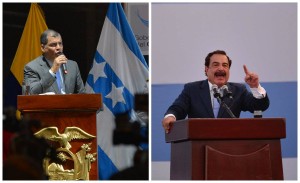 During the official acts of the Foundation of Guayaquil President Rafael Correa and Mayor Jaime Nebot echoed political issues in their speeches. Correa again questioned contrary versions to his redistribution of wealth proposal. Nebot reiterated his view regarding the contrary clamor on the streets, which has not been assimilated.

The president spoke about the inequities that happen in Guayaquil, that despite the high oil prices in previous years, municipalities receive more money today. “These transfers depend on oil and tax revenues (…) in 2015 Guayaquil will receive $ 294 million, 2.4 times more than before our government.” “Often it not said how much local governments are getting thanks to the good economic management of the revolution.”

Correa again talked about safeguards and Inheritance and Capital Gains laws, which won´t affect most of the population.He maintains his call for dialogue for those who want to be part of this but those he considers “destabilizers” he told them they will see at the polls in 2017.

For his part, Jaime Nebot said that freedom and progress of Ecuador are seriously endangered “by the totalitarian and sectarian attitude of the government.” He said he wants to impose an official ideology, a dominant party and media control.

When referring to the dialogue convened by President Rafael Correa, the municipal representative rejected the proposal by qualifying it as ‘another hoax’ because its criterion is exclusive. “Today, scared, he proposes the dialogue as a way to reach consensus … another lie,” he rebuked.

CAL will define regulations on speeches in the Assembly