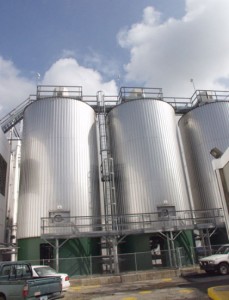 The Ecuadorian Constitutional Court (CC) answered to the scandal on its find for the defendant Cerveceria Nacional, which is accused of paying one million dollars to the judges in exchange of a favorable fail. Yesterday, Patricio Pazmiño and six more judges gave a press conference in the Main Assembly saloon.

Pazmiño informed that they did not talk on behalf the court, but as spokesmen designated by the complaint. His defense was based on the request for the intervention of the District Attorney’s Office in the case.

Assemblymen, Galo Lara, made the complaint. According to the statement of Lara, Cerveria Nacional made three deposits in the bank account of Alfredo Larrea Jijon, Arturo Larrea’s brother, who is the Court Secretary, just before this entity announced his decision on the company for a demand of former workers that demanded the payment of utilities.

Larrea brothers broke the silence to denied having received a bribe for the Constitutional Court (CC) to issue a ruling in favor of Cerveceria Nacional.

Alfredo Larrea told he was paid for his professional services as he worked on the trial of former employees.

“They (Cervecería Nacional) received a high fee proposal and it was accepted. Within our country is a significant fee, a millionaire one,” he said in an interview with Teleamazonas channel.

Arturo Larrea, secretary of the CC, said that has nothing to do with the professional activities of his brother.

The Court Spokesman remembered that as constitutional judges they signed an authorization to lift the bank secrecy of their accounts. At the same time the spokesman ordered to audit the goods of the nine members of the Ecuadorian Constitutional Court, and requested to the Superintendent of Banks, Pedro Solines, the investigation of their accounts. Cerveceria Nacional will be also investigated if bribery evidence is found.

About 70 former employees of Cervecería Nacional (CN) are planning to picket line tomorrow in the exterior of the Constitutional Court (CC).