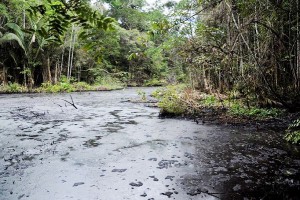 The report of the Comptroller revelas severe damage in areas where Chevron operated.

“Severe and moderate damage” in areas of the Ecuadorian Amazon where Texaco-Chevron operated for 28 years were evidenced by the Comptroller in its report based on a special examination.

80% of the sites analyzed by this entity are affected by high concentrations of hydrocarbons, consequently, the health of the inhabitants of Orellana and Sucumbios has deteriorated, since many manifest skin and cancerous diseases, etc.

The period covered by the report dates from January 1, 2009 to August 31, 2014, and it also determines that the water from places close to oil wells presents a “severe environmental impact.”

“With this examination we hope to finally clarify once and for all the reality of what happened and that does exist in the Amazon, and it is revealed what needs to be done in the future by the authorities and especially the Judicial area, in order to issue the due judgment,” said Carlos Polit, State Comptroller.