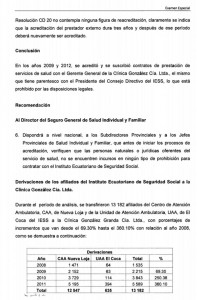 A special examination of the Comptroller concluded that the contracts for service provision signed in 2009 and 2012 between the Ecuadorian Institute of Social Security (IESS) and the Gonzalez Clinic, in Lago Agrio, whose owners are cousins of Ramiro González, former president of the Board of this public institution, are illegal.

The report argues that the current Public Procurement Act and the previous one prohibit the signing of contracts with board members, their spouses and relatives up to the fourth degree of consanguinity and second degree of relationship.

In this regard, Gonzalez said: “There (in the report) is no blame. I signed contracts with 280 clinics and the Gonzalez clinic had signed agreements since 2000. I did not sign that contract because the general directors are the ones who do that. I have nothing to do in this.” He added that there is another report of the Comptroller’s in which there are no observations on illegality.