Contract with Goltv is suspended, says lawyer of the FEF 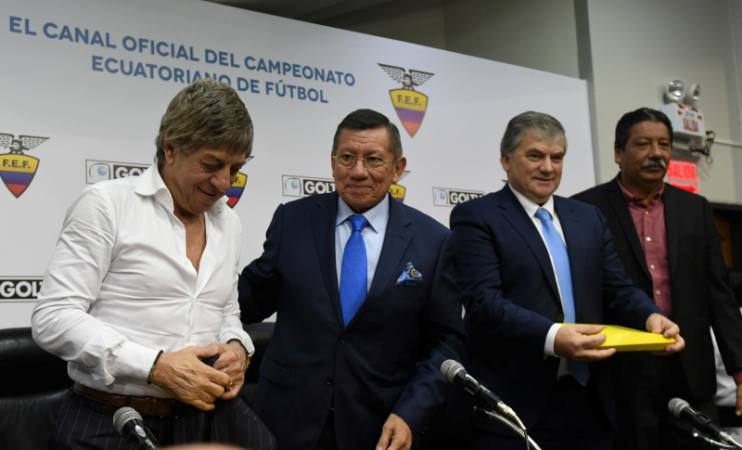 The lawyer of the Ecuadorian Soccer Federation (Federacion Ecuatoriana  de Futbol FEF), Jorge Chang, described as a “legal aberration” the ruling of the Judicial Unit 1 of Guayaquil, which requires the FEF to call a new contest for the television rights of the national championship.

“The resolution issued (last Wednesday) by a judge of first instance is a true legal aberration, without any support, without any legal argument,” said Chang.

The new legal process, against the contract between FEF and GolTV, arises from a request for protection action filed by politician Dalo Bucaram and his lawyer.

“Four companies competed, GolTV, Servisky S.A., WinSports and La Gardere. And the best offer was GolTV Latin America. The offers were opened in the presence of the notary on November 23, 2016. That document is public. Ask for a copy of that deed and they will realize the big lie. The best offer was GolTV, “said the lawyer of the Ecuafútbol

In addition, “I demanded that the evidence be presented that proves that GolTV filed the offer out of time (as alleged by the Dalo Bucaram party), unfortunately they did not present it. And this constitutional judge (Jean Vergara) wanted to build a test against us, in favor of the other party, ensuring that the offer was submitted after the deadline and that is false.

I rebuked him there in the audience, “Chang said. What Chang most regrets is that “the guarantees of the contract with GolTV cannot be executed. The guarantees exist, but unfortunately GolTV cannot deliver them to us because of the spirit and disposition of Dalo Bucaram.

That contract is suspended and there is no financial institution that can give a guarantee on a suspended contract, “he explained. Although Dalo and his adviser assure that the sentence that leaves this contract in suspense has no appeal option, Chang said: “There are legal provisions in which the injured, in spurious sentences, we have the right to appeal on no only before the Provincial Court of Justice, but we can also file an extraordinary protection action before the Constitutional Court “. “The political interference was more than reason, logic and law,” he said.

Because of the previous transmission contract, the TC and Gamatv television stations are still in default, since they owe the amount of $ 5 million.

“Politics is messing up national soccer. We are surprised that a judge obliges a private entity to make a tender to sign a contract, “said the leader of Liga. (D)