Controversies and ruptures this year in AP 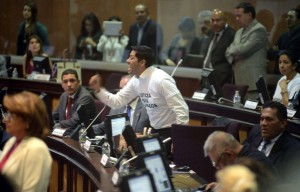 In its third year of the 2013-2017 period, the Alianza PAIS (AP) bloc in the Assembly eperienced more controversies and political divisions, in addition to the sanction imposed in 2014 to women legislators that supported the decriminalization of abortion by rape.

The first controversy became public during the nation report that President Rafael Correa gave last May 24.

In his speech, he talked about corruption in the ruling ranks and at the end of the ceremony, Assemblywoman M.E.G. was arrested for investigations.

The first rupture in which the ruling party lost a vote last June, occurred when the majority acquiesced to the partial veto of the then draft Organic Special Law of Galapagos.

Angel Vilema disaffiliated from AP. Moreover, the day of the vote in plenary, there was an exchange of accusations between Marcela Aguinaga and Vilema, and in Twitter, Correa described as “lies of a demagogue” the statements that said it was anti-technical setting wages based on the Index of Consumer Price.

Selection process begins for the TCE