Cordes asked the Secom a clarification by INEC data 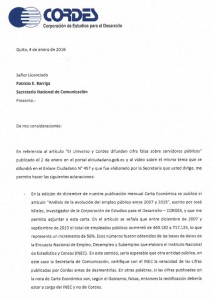 In a letter addressed to the Ministry of Communication (Secom), the Corporation for for Development Studies (Cordes for its Spanish acronym) assured that the figures of public employment that were released in its publication Economic Charter and reproduced by this newspaper, were obtained from the National Survey on employment, unemployment and underemployment, conducted by the Institute of Statistics and Census (INEC).

In the last weekly address, President Rafael Correa said that was a “lie” and that the payroll had increased because several outsourced employees were given job stability. He assured there are 487,867 servers and that the increase was 22.56%.

The Cordes asked Patricio Barriga, of the Secom, to clarify in the public media that the Cordes did not spread false information. He said that “it was expected” that the agency first certified the figures with the INEC before refuting them.

He explains that data from the INEC includes figures of appropriate, inadequate, underemployed and unclassified employees; and thus the distortion of the payroll is avoided.

US removes labels for meat products