Through an order issued last Monday by the Council for the Council of Regulation and Development of Information and Communication (Cordicom for its Spanish acronym), it was determined that the contents displayed in the “The Nalgómetro” segment of the program ‘Soy el Mejor (I’m the Best)’ which airs on TC television channel, are discriminatory for sex reasons; besides also discriminating women through a stereotyped representation that puts them in conditions of inequality with an undermining of their rights.

The opinion was signed by the council president, Patricio Barriga, who analyzed the segment that was presented in the program ‘Soy el Mejor’ in response to a complaint filed by Juan Torres Merino, general secretary of the Juventud Comunista del Ecuador (Communist Youth of Ecuador).

During the five-minute analysis, it was determined that the contents connote exclusion, distinction and restriction, through the objectification of women, to reduce he metonymically to a part of her body: her buttocks. 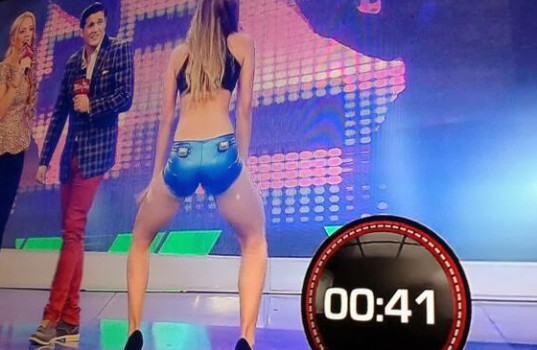 The Ass-o-Meter on TC television network.