The country is preparing to return to the new normal by May 4, but what about children? Until now, it has been said that in order to reactivate the economy during this health crisis caused by the coronavirus, personnel who work, for example, in sectors such as construction, commerce and notaries, may already return to their posts. Many are parents, they will go out, so who will the children be under the care of, if even the kindergartens have not yet opened ? 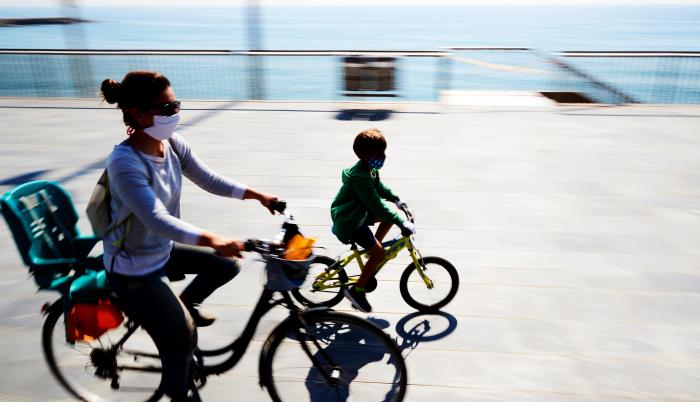 That in the long run they will not have anyone to monitor them, taking into account that if the grandparents used to do it, now it becomes difficult because they cannot leave the house; recognizes the educational psychologist Jenny Alvarado, it is worrisome.

Children  They are part of the group that must remain entirely at home. It has been announced that parks, squares and public spaces will continue to be closed.

And it is everywhere, he thinks. Who will help you study? Who will watch that he does not leave the house and eat as he should? The authorities must reconsider and not yet lift the insulation. That it is as they propose it now, in a fractional way, complicates things more. We have to wait. You can’t throw something like that lightly. “

Carlos González, clinical and child psychologist, shares this opinion. For him, although it is necessary to boost the economy, to avoid possible outbreaks, he adds, it is necessary to thoroughly analyze what will happen to each family and its members.

The virus is community-based and we don’t really know where the children will be safe. Children need to go out, but we cannot make a generality because there are children who are naturally depressed.

“If the parents leave, they may have their income, but there is also a risk that they can become infected and infect their children. This, especially if they do not take all the precautionary measures, which in effect not all follow them to the letter, ”he warns. For him, it is necessary that the majority of parents reactivate today through the telework modality. And it is that due to social distancing, even the staff who worked in the homes taking care of the children, now cannot do it for prevention. “Having someone come in and out of the house increases alarms and risk. It is too early. I would think that we have to wait another month… ”.

However, this is not the only concern that revolves around minors, who have already been locked up at home for 40 days. In Spain, yesterday more than six million children under the age of 14 were allowed to go out for a one-hour walk, always accompanied by an adult.

“Hopefully and soon in Guayaquil something similar can happen. Camila is tired of being locked up. I don’t know what game to invent anymore. I have done everything to keep her from getting depressed and even so, I notice her differently on certain days, as if wanting to not want to do anything anymore ”, says Milena Ocaña, who lives in Belo Horizonte and despite feeling safe -she says that in her stage no case of COVID-19 was reported – it has prevented her 7-year-old daughter from even going out to the patio.

Camila, she says, dreams of going for a bike ride with her friends around the citadel and then having a picnic on the grass, as she did every Friday.

“I like to play Fornite, but sometimes I get bored already. My parents don’t even let me stop on the sidewalk of the house to talk with other people. I just play play, I want to run and get on my skateboard. They are many days at home, ”says Sebastián Salcedo, 9, who lives in Los Ceibos.

What is happening in relation to children is serious and is not being thought about as it should be. Today, although the economy matters a lot, you have to think about minors and their well-being. It is constitutional.

In Spain, as Diario El País reports, in this first outing there were children who said they did not remember to pedal or ride their bicycle. Sebastián says that he does know how to do it. “I learned to use it from the age of 4,” he thinks. Agustina Terán, 5 years old, does not think the same. Her mother, Tatiana Vera, a Guayaquil woman who lives in Samanes 4, assures that this is her daughter’s greatest fear.

“Just two weeks before confinement begins, we had started riding a bicycle. We took her every afternoon to the Samanes park, now I have tried to use her in the small patio we have, she says she doesn’t remember… I dream that this will end ”. The situation is also distressing for the boys.

Control When they begin to make the measures more flexible, according to those consulted, the parks should be opened under opening hours. They will have to be disinfected constantly, a check will have to be made on how many children there are. Use the Internet to show small new places in the world.

The doctor in Pediatrics, Leonor Alarcón, explains to EXPRESO that children, like adults, by nature have the need to go out. However, their confinement is more complicated for them because they are more dynamic and active. “They do not understand what happens outside the house and therefore the mental load is higher. If distancing and social isolation is complicated for the adult, for a child, who cannot understand the situation much, it is worse, ”he argues.

The Government Minister, María Paula Romo, has announced that the places that continue to be closed, on a mandatory basis, are public spaces such as parks, squares, cinemas and other points of mass attendance. Although it is true, specialists agree that this is a good measure to prevent the spread of the virus, they consider that to encourage children, in some cases and with all the necessary measures, exceptions can be made.

Every day my son asks me why we don’t go to the park anymore. You do not understand well what I explain. Although we do activities at home, we still get desperate. His anxiety worries me.

For example, Alarcón indicates that in closed urbanizations and citadels, where there is a children’s park or entertainment space, they could go out with an adult for a walk. As long as the place is disinfected and care measures are taken such as the use of gloves and masks.

“As they are in development, going out will help them with their gross motor skills and fine motor skills, which will also have a great benefit for their minds. What to avoid are sites with a lot of people circulation. So in the neighborhoods, open places, it is not advisable to go out, “he says.

Another important point to address, says the doctor, is that this measure cannot be generalized, in case the authorities analyze it, because a part of the child population is immunologically depressed. Although the immune system of children is virgin and therefore does not affect the pandemic like adults, there are children with heart disease, asthma, Down syndrome, among other diseases of their own. For this group, leaving involves a greater risk if they become infected with the virus.

The expert psychologist in children, Lila Adana, agrees that it is necessary to take the children out and that it can be done in Ecuador. However, it clarifies that the decision to remove them or not, must be made by the parents depending on how their homes are. That is, if the house is spacious and has an outdoor backyard, if there are multiple children, there is no such need.

“In this country, we could open that measure. But as Spain has done, assuming simple activities such as going around the block, but not taking them to the pharmacy, not taking them to supermarkets and avoiding the parks, “he lists.

Psychologically, a short walk, says the specialist, will help reduce anxiety in children, who although they cannot understand the situation the world is going through, they know that something bad happens because emotionally their parents transmit it to them.

Observe
When they are young children, it is important and convenient for parents to hold their children so that they see the panorama through the window. This, explains Huerta, so that the little ones see something different and not just television.

“Besides going out for air, another important detail that helps children and adolescents, especially those between 6 and 8 years of age, is to have contact with their friends, with their peers. This can be through the cell phone or maintaining distance, “he recommends.

The importance of sunbathing

Children need sunlight, physical activity, sweating, running, and oxygenating their bodies. This is explained by the clinical psychologist specialized in children Caro Huerta.

“The situation in Guayaquil is still very complex for children to return to play as they did in open spaces. I don’t recommend taking them out to play, but there are strategies so that they don’t get depressed, ”he says.

If there are windows, balconies or terraces at home, the professional recommends exposing the little ones there in the afternoons so that they can receive the sun and that they can see outside. This refreshes them and helps them relax and connect with the outdoors.