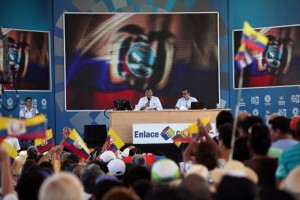 President Rafael Correa, has made a challenge today to be told the names of “the new rich of Alianza PAIS,” as stated during his Saturdays weekly address, broadcast on January 2 from the province of Santa Elena.

“Have you heard of persecuted journalists, imprisoned for denouncing corruption?” Asked the president, who has referred at least on three occasions to the independent press as the most powerful enemy of the citizen’s revolution.

“Have you known anyone that has reported a corruption case? It’s just blah blah. Then, immediately turn on the alerts, dear young people, so you know you are in front of a corrupt: the one that speaks of corruption and does not specify anything should not report it.The new rich of Alianza PAIS! Tell me the names, to know, to punish them. They never say anything, they always say the new rich, corruption…… They never specify anything, they are liars,” he said.