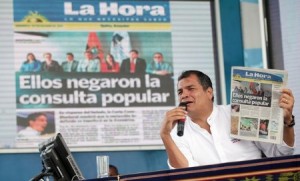 President Rafael Correa defended yesterday the decision of the Constitutional Court (CC) of approving 16 of the 17 constitutional amendments proposed by the Alianza PAIS block to be processed via National Assembly.

Correa criticized the attitude, he said, several private media had, wanting to discredit members of the CC.

Correa criticized the cover of the print edition of the newspaper La Hora, entitled: “They denied the referendum.” “This is a lie, let’s see who is complaining when I take a picture of a lying journalist, go to the Court, because they are in ‘danger’ and look how they put this in the headlines,” he said.

On the referendum promoted by Guillermo Lasso, Correa said, “the fact that they wanted to seek a referendum is one thing; that the Constitutional Court takes that referendum into account is another, what is being done is to be in compliance with the constitution and in breach with the agenda of the press.”