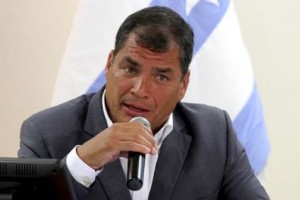 “It is good for the Ecuadorian justice and the regional courts. This is a crime and a common criminal,” said Correa yesterday during a dialogue with the media in Guayaquil, regarding the annulment of territorial asylum to former Assemblyman Galo Lara.

Correa expressed his “gratitude to the Panamanian government” by the decision. “It has been done what it had to be done,” said the President about the government of Ricardo Martinelli.

Lara was convicted of being an accomplice by a triple murder in Quinsaloma (Los Rios) and sentenced to ten years in prison.