Correa denounces cyber attacks to his accounts from the US 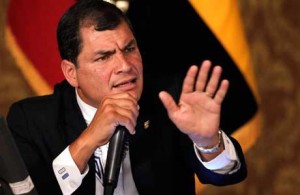 President Rafael Correa denounced this Saturday November 22 that he received cyber attacks from a server in the United States against his communications.

“On Thursday, all day, I received attacks (which) come from abroad and go to a server in the United States against my accounts,” the president said during his weekly address from Quito.

The aim of the attacks is “hacking us, take away information, turn on the microphones to listen to our conversations,” said Correa. He also wrote in his Twitter account that “they have infiltrated computers of people very close” to him and it is about “systematic and high-tech attacks.”