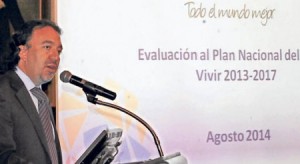 President Rafael Correa yesterday held a meeting with the Ministers of State in order to check the fulfillment of the objectives and goals of the National Plan for Good Living. Furthermore, they analyzed the status of each area of ​​the government administration.

The Public Radio explained that among the topics discussed was the closure of Banco Sudamericano and the border problems faced by the Guayas province.

Ximena Amoroso, director of the Internal Revenue Service (IRS), also attended the meeting and indicated that the organization has a goal of $ 14,000 million in tax revenue for 2014. “We are in compliance with 99.9% in the first half. SRI collection is meeting the goals they had in 2014″, she said.

María del Pilar Cornejo, Risk Management Secretary, said during her speech that the entity seeks to coordinate the work with municipalities and fire departments to mitigate the effects of forest fires.

Other issues concerning economic and security policy were also discussed in the meeting.