Correa gives advice to Europeans to overcome the crisis 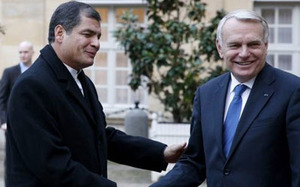 The regime leader Rafael Correa urged Europe not to repeat the mistakes of Latin America to overcome the current economic crisis.

“Latin America is an expert in crisis, because he has known them all,” said Correa with French students during his lecture at the Sorbonne University, on the first day of his official visit to France.

The president compared the current debt crisis that exists in Europe that Latin America lived in the 90s and I regret that they apply the same solutions “are delaying the start of the crisis” and “have a high social cost.”

The Ecuadorian leader recalled the cases of Greece, Portugal, Cyprus, Spain or Italy, and stated that those actions “were not intended to end the crisis, but to ensure the payment of interest on the debt owed to private banks.”

Correa urged European countries in crisis “not to make take the slightest attention to the International Monetary Fund (IMF).”