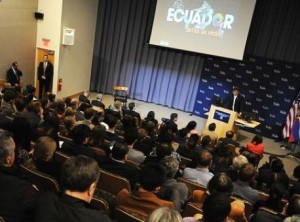 On his third day on tour in the United States, President Rafael Correa gave a lecture at the prestigious Yale University about the economic performance of Ecuador and the development model in higher education.

During his speech, the president explained the process developed by the Government, to achieve what he called a ‘transformation’ of higher education.

Regarding the closure of 45 colleges performed in Ecuador, Correa said: `Following an assessment, it was known that higher education in Ecuador was below the levels in Latin America. Titles were sold to students.´

Gratuity and the creation of four public universities (Uniartes, UNAE, Yachay and Ikiam), was also stressed as other achievements in higher education. According to Correa, these institutions will generate science, research and changes of the productive matrix.

Pachakutik will try reinstating to Jiménez to the Assembly