Correa justified the application of safeguards 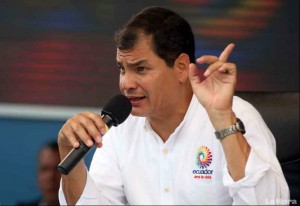 President Rafael Correa justified during his weekly address the implementation of multilateral safeguards and noted that those measures that should Ecuador seeks to apply would respond to “external shocks”.

“The economic measures taken are not because the country has a fiscal problem,” but because in the international market have been lowered the prices of products such as oil, coal, gold, silver, copper and tin; a situation that nations in the region can not control and are therefore external shocks, President Rafael Correa said.

Correa said that 2009 was a difficult year and yet the country grew 0.6%, although the region fell by 2%. “So the country is prepared to move forward,” he said.

The President recalled that to address these external shocks the instrument used is the exchange rate. Thus, Colombia devalued its currency by 20% and Peru for 7% to make exports cheaper and imports more expensive; However, he added, “Ecuador, which has its own currency, can not do that”.