Correa justified the controversial vote of Ecuador at the UN 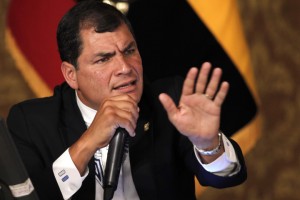 President Rafael Correa yesterday justified Ecuador´s vote against the request of the General Assembly of the UN Security Council, to take alleged crimes against humanity committed by North Korean authorities to the International Criminal Court (ICC).

Correa said: “Ecuador voted against the procedure (…) long ago has been established that there should be general human rights reports, not by selectively chosen cases and what is the preamble to invasions, bombings, etc.”

Furthermore, he added: “We are never going to justify procedures that violate the letter.”

On November 18, the UN asked the Security Council to consider bringing to the ICC the alleged crimes against the humanity committed by the authorities of North Korea. The text, encouraged by the European Union and Japan, received 111 votes in favor, 55 abstentions and 19 against.