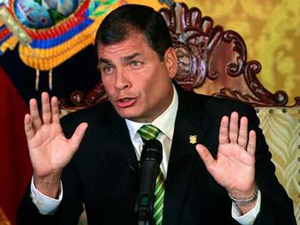 The regime leader, Rafael Correa, said yesterday, Thursday September 26, that the oil in the Yasuni National Park will allow the country to grow steadily in the coming years with 8 percent.

During an interview on Channel Telerama, the president said that the exploitation of the Yasuni-ITT, will be positive for the country’s economy and in the social sphere as well, since it will fight the extreme poverty, he has proposed to eliminate to 2017 when his term ends.

Correa said that “the impact is huge,” it is believed that the oil production in Ishpingo, Tambococha and Tiputini (ITT), will increase by 5% the country’s growth rate in the peak stage production of such deposits.

The President explained that according to government estimates, without exploiting the ITT, the country would grow by 3%, but such exploitation rates would reach to 8% in two or three years.

“We can not be so irresponsible to leave more than 18 000 million (dollars) underground” in a country with 24% of child malnutrition, added Correa.

However, it said decision was “painful” to ask the National Assembly to approve legislation the ITT exploitation, as this puts an end to his initiative to leave underground 920 million barrels of crude oil reserves in the area, in exchange of international compensation.