Correa meets with the winners of the elections 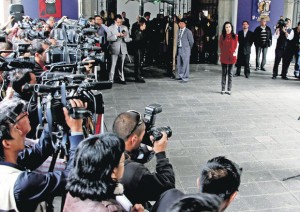 Correa meets with the winners of the elections

More than forty new dignitaries of all political stripes, including mayors and elected Governors of the country’s largest cities, had lunch with the head of State and some Ministers of Government in the Carondelet Palace.

Among them, was Mauricio Rodas, elected Mayor of Quito. The absent from the meeting were Mayor of Guayaquil, Jaime Nebot and Carlos Falquez, Machala, both by the Social Christian Party. Also, not attended the reelected prefect of Orellana, Guadalupe Llori.

Rodas arrived passes 13:15. Upon arrival he said look with good eyes the “opening” of the President to dialogue with elected officials, despite political and ideological differences that may exist. However, was contrary to the constitutional reform for the indefinite reelection, as proposed by the ruling party.

Correa welcomed attendees, congratulated them on their victory and assured to “achieve the good life”, it is important to take into account local governments and working with them to crystallize development projects and works across the country.

According to Susana González, Christian legislator, Nebot would have shown no interest to attend, since the city has been “permanently attacked” by the President. On his side, Falquez told that it did not attend the lunch at Carondelet for personal reasons.