Correa proposed to change the statutes of UNASUR 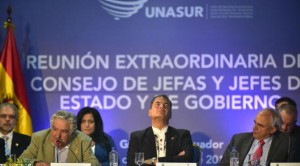 President Rafael Correa raised yesterday to his counterparts in the Union of South American Nations (Unasur for its Spanish acronym) a change of the statutes due to the lack of consensus to adopt some initiatives of economic and financial integration.

“Certainly, it is necessary to think on the institutionalization of Unasur, where all decisions in its three collegiate bodies of administration, should be taken by consensus, i.e., there is veto, the best way of not progressing,” said Correa at the opening of the UNASUR meeting that will continue today.

“We need to review our laws and set no consensus, yet qualified majorities in the important points,” added the President.

Correa reiterated his call for concrete initiatives as the south bank and reserve fund, a system of compensation changes to minimize the use of the dollar and the creation “of a regional currency” in medium a term.

Housewives will receive retirement in a proportional way