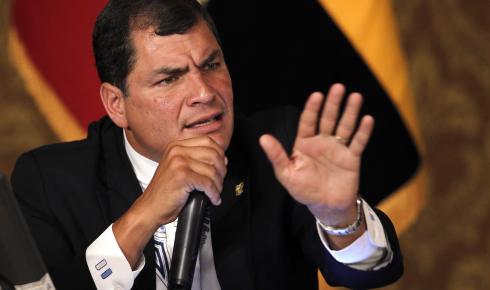 President Rafael Correa said he would not agree with the fact that the authorities who decide to go on re-election in the next general elections ask for a compulsory license for the campaign because, according to the president, “governance is exceedingly lost.“

For the president, requesting a license would be “a mistake, it sounds nice, but is not real,” he said in a discussion panel with media in Pastaza.

The license application to the authorities who wish to be reelected in office is part of the reforms prepared by the National Electoral Council (CNE) and the Electoral Tribunal to the Code of Democracy that would be sent to the National Assembly in March.

Juan Pablo Pozo, President of the EMB, said that the request for leave to proselytize 45 days before the election should have a compulsory character to prevent ambiguity and provide clarity to the citizens in relation to the candidate and public officials.

The president said that if he requests the license “who governs? … Everything can fall. What if the Vice President is also a candidate? … Those are nice things, but they are not very pragmatic,” were the statements of Correa.

Black boxes of Dhruv helicopters will be sent to the US