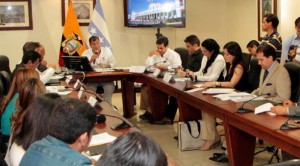 The President of the Republic, Rafael Correa, yesterday at the roundtable discussion he had with the media referred to the controversy that has been generated on the transit competencies with the Mayor of Guayaquil, Jaime Nebot.

Correa explained that there are many legal ways for the Municipality to assume the exclusive and mandatory competencies specified in the Constitution.

“Is not about accepting or not accepting. He believe he is above the law. I think Mayor Nebot is the best the right has, is a very able man but I have never seen him so lost with so despicable arguments. He does not know what to say anymore”.

The President asked to point him out where it says it is the duty of the government to grant subsidies to municipalities for them to deliver to the carriers. “Nebot is the only mayors who says that resources are not sufficient because we do not give them the subsidy”, he said.

“I respect Nebot but it has no logic what he says. Few times I have seen him so wrong. Pride makes silly the most capable man”, the President concluded.