Correa says he has no regrets, he has done extremely well 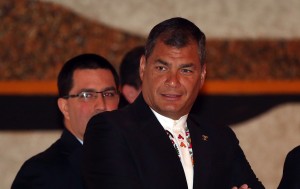 It is “impossible” to deny that Ecuador “changed for the better,” said Ecuadorian President Rafael Correa, who is currently meeting nine years in power with his political project, called the “Citizens’ Revolution.”

Prior to initiating a meeting with his ministers, Correa said it was “impossible” to deny the change despite the “meanness of Ecuadorian politics.” Correa, who will leave office in 2017, said that among his main tasks is to fully accelerate the structural work the country needs these last months of his government.

When assessing the nine years of the current government, Alberto Acosta, former president of the Constituent Assembly, installed in the city of Montecristi, that amended the Constitution in 2008, told to daily El Comercio, that this is ” (almost) like a wasted decade.”

“No ruler has been so long in office and none has had so much revenue in the republican history. Unfortunately, Correa was not at the height of challenge history imposed him,” said Acosta, who left the government several years ago.

He noted that “in the light of the results, without denying the progress mainly in public works, it is frustrating reviewing what has been done compared with what was synthesized by the Government Plan of Alianza Pais, made in 2006, and embodied in the Constitution Montecristi.” (I)