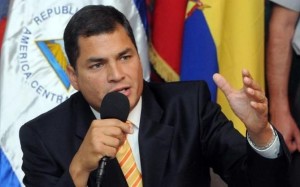 President Rafael Correa announced yesterday in his Report to the Nation his support to the legislative block Alianza PAIS (AP according to its acronym in Spanish) to carry out a constitutional amendment allowing indefinite reelection for all popular elected positions.

Correa highlighted some milestones achieved during his government, such as poverty reduction, increasing investment in health, secondary education and in human talent.

In the second half of its report, the president denounced that with the complicity of some media, some local governments, national and international capitalism and the extreme left, “they are preparing a ‘ soft ‘ coup d’etat – with the style of what is now suffering Venezuela and any excuse is good, as the Water law , mining and Yasuní,” he said.

In this context, Correa revealed that, after a deep reflection, he decided to support indefinite reelection for popular elected positions, “so that Ecuadorian people ar could be the ones who choose the continuity or alternation of their leaders.”

Months ago, in several interviews, the president said he was opposed to that figure. However, Correa hasn’t confirmed yet his candidacy for 2017. The decision, he added, will be decided in function of what AP decides and prior to political conditions of the 2017 election.