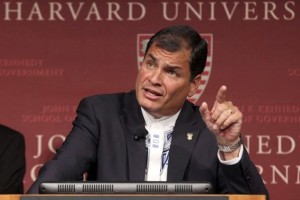 The attitude of the Venezuelan opposition groups was criticized yesterday by the president of Ecuador, Rafael Correa, to which he said, has promoted violent demonstrations there. Also defended the dialogue to solve the problems of this country.

Correa said that at least half of the deaths in that country during the riots that occur several weeks ago “are the result of violence from the opposition and not from the government.”

He also noted that “it is seeking peace in Venezuela,” but advocated that the search were make from the respect to democratic government of that country and recalled that the foreign ministers of Ecuador, Brazil and Colombia carry out a intermediary role with this goal.

The president made these considerations during a round of questions, after giving a lecture at Harvard University in Cambridge (Massachusetts, USA), as part of a academic nature visit by U.S.