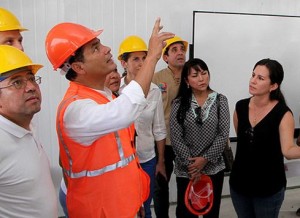 Photo: Presidency of the Republic.

President Rafael Correa toured accompained by the Minister of Education, Augusto Espinosa, the school-camps that are built in the 7th district of Guayaquil.

Correa visited the Cacuango Dolores Camp, in Los Vergeles (north of Guayaquil), where one of the 30 camps for Districts 7 and 8 is being built, as part of Los Vergeles and Monte Sinai.

Espinosa indicated that in Los Vergeles, the demand increased by a 50%, while in Monte Sinai, by over a 40%.

While the camps are under construction, eighth grade and third year of high school classes in both districts are suspended.

It is estimated that next June 2, students of these two areas begin their school year.

80 U.S. military will support search for kidnapped girls in Nigeria