Correa wishes to kick out the agitators 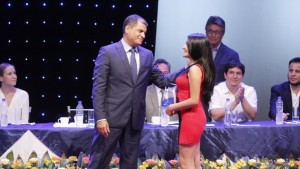 The Ecuadorian President, Rafael Correa, participated in the Rita Lecumberri Awards to the academic excellence, organized by the Education Ministry.

After rewarding the best students, teachers and educational institutions of the year, the president addressed the audience and announced that that he will take action against different state subsidies to different universities such as “Universidad Andina Simón Bolívar” and “la Facultad Latinoamericana de Ciencias Sociales”. Correa claimed that the government should not provide subsidies to those that do not need them.

The president criticized the delivery of 32 million dollars in total for both universities that offer master’s degrees. It is preferable, he said, provide direct scholarships to outstanding students. (I)