Correismo and PSC seek votes to remove the Judiciary

The additions and subtractions continue in the Assembly, on the eve of the political trial of three members of the Judicial Council and its former president. The correismo of Unión por la Esperanza (Unes) believes that it will reach more than 92 votes for a possible censorship and dismissal of officials. In the Christian Social Party (PSC) there is caution. 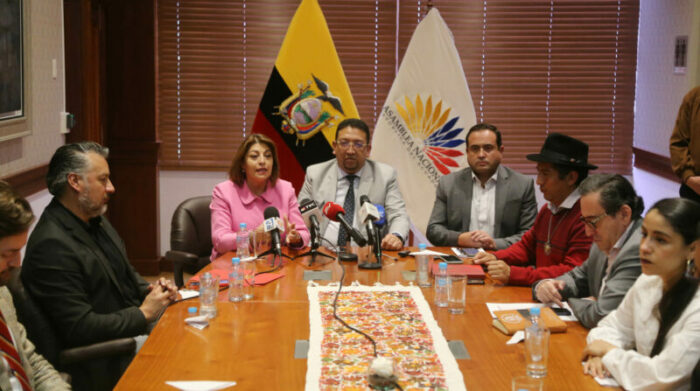 Press conference at the CAL, in the National Assembly after the meeting between the Minister of Government in charge and the representatives of the Assembly members’ caucuses.

Having reached 87 votes for the interpellation process to continue, in last Sunday’s session, makes these political forces believe that they will reach their goal. The lobbying continued this August 30, 2022, in Parliament.

“Be certain that there will be not 92, but 94 wills that we are going to give way to this censorship and dismissal of those officials who have kidnapped justice,” said Viviana Veloz, who is promoting this political trial.

Correismo and the PSC group together 64 seats. That is why the position of Pachakutik (PK), which has 27 assembly members, and the 15 assembly members of the Democratic Left (ID), which are not characterized by organic voting, will be key. The bench of 27 ruling party legislators is against the process.

The PSC coordinator, Esteban Torres, said that he prefers to be cautious. However, his co-idea, Jorge Abedrabbo, insisted: “there were 87 (votes) on Sunday, we hope there are five more for dismissal and censorship.”

Torres declared himself surprised by the resolution with which the Plenary gave way to the interpellation of the president of the Council of the Judiciary, Fausto Murillo, the members Ruth Barreno and Juan José Murillo, as well as the former president María del Carmen Maldonado, for alleged breach of duty.

Along with Veloz, Luis Almeida, PSC assemblyman, will act as a questioner in the session scheduled for this Wednesday 31, starting at 7:00 p.m.

ID and Pachakutik benches are divided

The coordinator of the ID caucus, Marlon Cadena, and other assembly members of this party rejected the statement with which the directors of this political organization ordered that they abstain from voting for this political trial.

“We have pointed out that decision of the national executive council that it was really taken with less than half of the members and that we, this bench, cannot be that they want to impose us when we are not even aware of the due process”, Wilma Andrade maintained.

However, the former coordinator of the ID bloc, Alejandro Jaramillo, assured that this impeachment trial is ill-conceived. “We have done a technical and legal analysis, and it really does not meet all the requirements, both formal and substantive “, he argued.

Sofía Sánchez, deputy coordinator of the Pachakutik block, assured that in this group there is a majority of legislators who do not support this request for impeachment. She indicated that, once the evidence for the charge and defense is presented in plenary, they will decide whether they will go for abstention or against it.

Among the assembly members of the self-proclaimed rebels of Pachakutik there are also divided opinions. “As they say in my town: there among whites, there among them. We don’t get involved in that,” replied Mario Ruiz.

Mireya Pazmiño anticipated that she will vote for the impeachment, but Darwin Pereira pointed out: “We don’t know what is going to come, what are the intentions behind it and it is what we are going to have to dig these days to determine if this Judiciary Council”.

Will Smith visited the fearsome ‘Devil’s Nose’ in Alausí