Court of Pichincha denies appeal of twelve students of ICT 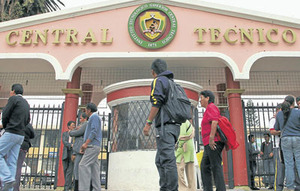 The Criminal Chamber of the Court of Pichincha denied the appeal of the judgment against twelve students of the Central Technical Institute (ICT). The judgment came after a demonstration on February 22, where students were accused of rebellion.

The application was used by eight of the 12 students, and yesterday, after deliberating for three hours, the Court upheld the ruling of the Ninth Court of Criminal Guarantees. Now they must go to the National Court of Justice to bring an appeal to the judgment, as it informed their attorney Washington Serrano.

Serrano said that “the prosecution did not give these arguments and today we face a new one to justify the illegal act,” while the prosecutor Jose Jaramillo held that “it was always argued that processed rebelled, revolted against an order of the authority and the group behavior elevates everyone to be confined for the crime of rebellion.”