The 2012-2016 Bribes judgment entered its execution phase . On the afternoon of this Wednesday, September 23, 2020, judges Iván Xavier León, Marco Rodríguez and Iván Saquicela ordered the Secretariat to officiate at the National Police to locate and capture 18 of the 20 sentenced for bribery. In that group is former President Rafael Correa , former Vice President Jorge Glas , former officials of the previous government and businessmen. 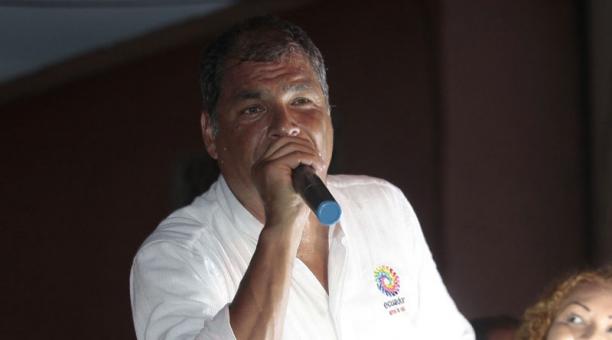 “It is ordered that the Secretariat -in the course of this day- send the corresponding offices, both to the General Commander of the Police , and to the Chief of the Judicial Police , for their immediate location and capture.” After completing his arrest, the Court must be informed to issue the constitutional imprisonment ballots.

Within the execution of the sentence , it is detailed that the loss of the rights of participation of all convicted persons is in force, for a time equal to that of the custodial sentence , that is, eight years. That is why the National Electoral Council (CNE) was informed so that it is aware. “It is provided that the Secretariat -in the course of this day-, proceed with it.” The Court ordered to attach certified copies of the judgment of first and second instance, as well as the reason for executing the document.

In the case of the former president and the former vice president, other procedures were carried out so that they stop receiving their life pensions for having been in charge of the Executive . “By reason of the conviction against him being enforceable, it is provided that the Secretariat -in the course of this day-, the Ministry of Finance be notified so that immediately, such pensions are no longer paid.” This is based on the approval of the Humanitarian Law that decided to leave without lifetime pensions to leaders who had not concluded the period for which they were elected either by cessation of functions according to one of the causes established in the Constitutionsor, who have been sentenced for crimes of embezzlement, bribery, among others.

The Court also ordered the transfer of Alexis Mera , former legal secretary of the Presidency, from his house where he was serving an arrest to the Sierra Centro Norte Regional Social Rehabilitation Center, in Cotopaxi .

With regard to legislator Viviana Bonilla , the Court ordered that the National Assembly be officiated by the Secretariat so that “immediately the legal situation of the aforementioned convicted person is noted and, by said entity, the pertinent actions be taken according to its internal regulations ”.

With this court order , the authors by instigation, co – authors and direct authors must pay the value of USD 778 224 ; and, the accomplices , USD 368 632 at the latest within 30 days after the execution of the process. For this reason, the Attorney General’s Office on behalf of the victim (Ecuadorian State) was ordered , within 24 hours, to provide the Court with the account number in which the deposits should be made.

The Court also specified how the symbolic reparation measures to be complied with by the sentenced must be carried out. For example, the expression of public apology will be made in the Plaza de la Independencia in Quito. The day and time have yet to be set.

Regarding the placement of a plaque, in the Carondelet Palace , the text that was defined is the following: ‘Public resources must always be administered honestly, public service is nothing other than a service to the community, subject to to the principles of ethics’. and it will be written in Spanish and Quichua . Like the previous measure, the day and time to comply has not yet been defined.

The Court also delegated to the Public Prosecutor’s Office and Attorney General’s Office to carry out the pertinent steps to adopt mechanisms so that those sentenced to comply with the 3 00 academic hours course on secular ethics .

This execution of the sentence occurs after on September 7, 2020, the Court of Cassation of the National Court – with a majority vote – accepted the request of the Prosecutor’s Office and declared inadmissible the appeals presented by sixteen of the sentenced, to their allegations have not been justified.

That day, the Court – ex officio – decided that day to marry the sentence in two cases: due to an erroneous interpretation in relation to Pamela Martínez , noting that the correct sentence is nine months and fifteen days, taking into account her effective cooperation. Then, on September 18, the Court of Cassation denied the appeals for expansion and clarification filed by 13 of the 20 sentenced persons, declaring them “not pertinent.”