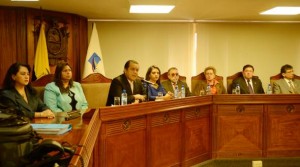 The Constitutional Court (CC) yesterday denied all three claims of unconstitutionality brought against several articles of the Communication Law (LOC for its Spanish acronym). In addition, the court changed the text of three of them.

The decision was approved by the court plenary by the vote of eight of the nine judges. Judge Manuel Viteri did not vote.

Diego Cornejo, who represented the people that raised one of the three lawsuits, said: “By pretending to give a modulatory judgment, which rejects our demand and corrects the judgment, the CC amended the constitution, because the law determines that the communication is not a public service.”

The amended texts revolve around: The rights of foreign journalists, the requested information for journalists, and shared responsibility of journalists and media owners.

The CC declared unconstitutional the sentence of Article 2 of the LOC that differentiates foreigners “who regularly reside in the country.” The Court relied on that they are equal before the law.

Furthermore, the judgment was modulated in Article 56 of the LOC and quashed the possibility to ask the people who run media to give a report about themselves.