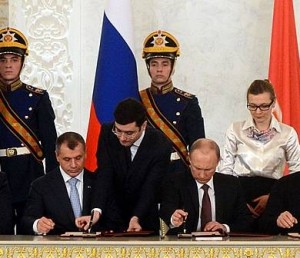 President Vladimir Putin and the Crimean delegation, composed by the leaders of the peninsula, proceeded to sign the international treaty under which Crimea and Sevastopol become part of the Russian Federation.

The Russian leader defended the legality of the referendum held in Crimea last Sunday and insisted that the consultation was made in accordance with international law.

Likewise said that Ukraine, The United States and its Western partners had gone too far. “Everything has a limit” and Washington “pierced him” to the neighboring country ,said Putin, accusing them of being accustomed to act according to the law of the strongest.

After his speech, Putin signed the treaty by which Russia accepts Crimea as a new republic and Sevastopol as a city with special status, such as Moscow and St. Petersburg.

The head of the local Parliament, Vladimir Konstantinov and Prime Minister Serguei Axionov, signed representing Crimea; for Sebastopol (harbor where the main base of the Russian Black Sea Flora is located), signed Alexei Chaly, who holds the position equivalent to mayor of the city.