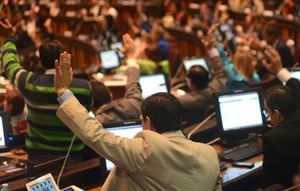 The new Integral Criminal Code contains at least 11 items related to the rights to the information or opinion. Among them is the definition of slander and rules for investigating crimes committed by the media.

The original draft proposed by Correa contained 17 types of libel accusations and the report for the second debate, of October 4, which containing slander and libel accusations as a crime against the right to honor and reputation. However, last Tuesday the Assembly adopted slander in that section.

While Article 182 stated that a person who commits a crime of false accusation against another shall be punished by six months to two years. There is also the possibility that a process to establish felonies in social networks, so said the legal secretary of the Presidency, Alexis Mera.

Other crimes such as “media lynching” intensely exposed by Maria Augusta Calle (AP), was created in the Communications Law and already has administrative penalties.