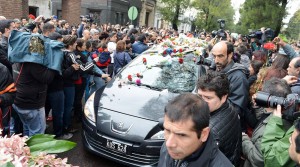 In the middle of sayings like  ‘bravo’, ‘thanks’ and ‘idol’, Gustavo Cerati was buried yesterday in a cemetery of Buenos Aires where hundreds of his supporters gathered to say goodbye to the talented composer who spent his last four years in a coma.

The singer was buried in a private ceremony conducted by his family. In the cemetery are also buried or cremated Argentinean great singers like Carlos Gardel and Mercedes Sosa.

Fans of the musician, many of them between 20 and 30 years, tried to touch the car carrying the coffin. Some threw flowers into the roof of the car, other leaned against it and cried, spending like that the rainy day.

There were even some fans who tried to climb trees of the cemetery to see, at least from a distance, the coffin with his idol inside.

When the coffin was introduced in the pantheon, relatives and close artists to the musician embraced each other and paid him respect like this. Among them was Lilian Clark, mother of Cerati and Zeta Bosio, bassist of the band Soda Stereo.

Upon leaving, Clark saluted and raised her thumb to the admirers of his son, who clapped and cheered. The old woman smiled weakly. “Idol, strength family,” shouted several of the crowd. She was his most loyal companion during his time in a clinic at the capital of Argentina.

Cerati died at age 55 of a cardiac arrest after having been in a coma since May 2010, due to a stroke he suffered at the end of a concert in Caracas.