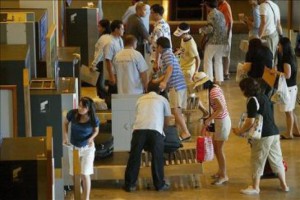 Due to frequent arrivals of travellers with bags of luggage, carrying new products are factors that Customs Agents consider to determine if a traveller enters merchandise with the intention of avoiding taxes.

The Customs Administration developed a control system on airports since the second half of this year. Police officers are reinforcing the migration information because some of this merchandise is employed for the sewing industry without paying taxes.

The Customs Corporation has developed and computer system to register the frequent travellers and the luggage they bring with themselves. This would allow a quick online identification of the traveller’s profile. The Customs Agency is not giving any exact numbers regarding these program registry, however the main risk is perceived from travellers that come from United States or Panama.

On a positive profile identification the migration officers would proceed to investigate their luggage since the tariffs represent the 10% of the products value, which is over $5,5 per kg.

Manager of Customs Operations, Xavier Cardenas explained that some personal products are free of taxes, like clothing. However some travellers bring three clothing’s of the same design and size, which are going to be sold presumably.

“We have identified that many of the passenger provide merchandise to clothing stores.” Cardenas said that during this year, 248 offices of 13 malls on Quito and Guayaquil have products brought by travellers who didn’t pay any taxes.

According to the Customs reports of the last year, the clothing items smuggled on the airports of Guayaquil and Quito had a price of $6,9 million, whose 70% belonged to payments of the sewing industries.

Gabriela Uquillas, from the Guayaquil Chamber of Commerce stated that these controls would formalize the commerce avoiding the illegal market competition. “A good Customs Agency is the one that doesn’t open the 100% of the containers or the 100% of the luggage, since it clearly has identified the profiles of those that are smuggling item.” Stated Uquillas.