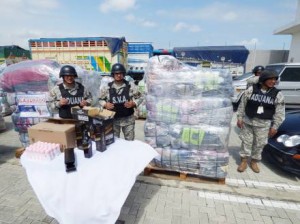 The Customs Office recorded almost  $ 7.5 million in goods that tried to enter Ecuador or that were commercialized without fulfilling legal requirements or without documents supporting its lawful origin. This figure is from January to April 2014.

Unlike last year, the control entity reached $ 22.5 million in seizures of goods nationwide, in 2013

While this year, the institution intensified operations to perform more searches and decommissionings in shops.

The products that have been confiscated are : textiles, food, cosmetics, cleaning products, footwear, electronics devices, liquor and medicines. People who enter products illegally use various mechanisms to evade tax obligations.

That is why the Customs Office has worked jointly with the Armed Forces, the National Police, the Interior Ministry and the Prosecutor´s Office.

Authorities also issued a call for natural persons and guilds to conduct anonymous complaints in the case of detecting irregularities.