Deadlines complicate the agreement with the EU 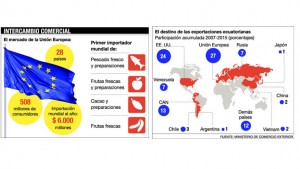 The Ecuadorian Government and the European Parliament agree that the deadline for the signing of a trade agreement begins to fall short. Monday they will meet to find a solution.

Juan Carlos Cassinelli, Assemblyman of Alianza PAIS, spoke with a group of MEPs last week. They proposed the appointment scheduled for Monday to develop a strategy to reduce prior procedures to the final signing of the trade agreement. The meeting, to be held in Brussels, will be attended by representatives of the ministries of Foreign Trade and Industry, the official said.

The goal, explained Cassinelli, is that the parliament decides to accelerate steps to allow advance the signing of the agreement with the European Union in at least two months. The legislator hopes that the treaty is sealed in December. In an optimistic scenario, he said, the document could take effect in October.