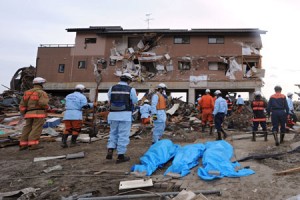 The death toll from Japan’s earthquake and tsunami rose to 13,843 on Monday, while the efforts continue to stabilize the damaged nuclear reactor plant. According to Japan’s National Police Agency over 14,030 people are missing as the police and soldiers search villages.

Meanwhile 136,000 people have been displaced and no deaths have been caused by the incident at the nuclear plant. Safety officials are using remote-controlled robots to record the high levels of radiation inside near the reactor two of the Fukushima Daiichi nuclear power plant in northern Japan.

Safety agency’s chief spokesman, Hidehiko Nishiyama, informed that there has been no immediate explanation for the much-higher radiation levels recorded in the airlocks. The robots began working last Sunday to determine the conditions of reactors 1 and 3, however their access was limited due to the large amounts of debris in reactor 3.

The robots began working right after Tokyo Electric Power Company, announced their six-nine month plan to restore normal cooling systems and shut down damaged reactors at Fukushima Daiichi. Meanwhile the Japanese government has informed that the situation is a top-scale nuclear disaster.