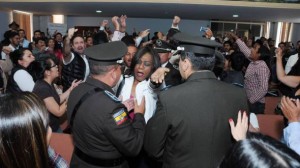 The third debate organized by the Casual Commission for amendment held generating confrontation between supporters of Alianza PAIS (AP for its Spanish acronym) and the followers of the group Compromiso Ecuador, led by former presidential candidate Guillermo Lasso (CREO).

The meeting took place yesterday in the auditorium of the Casa de Cultura. In it, the Commission received nine people, including Yachay University students, teachers, political leaders, exasamblymen from AP and councilors.

Paulina Gonzalón, leader of the Afro groups, supported the reelection. “Why the fear if in the polls Ecuador will recognize to whom he gives the right to rule, “he said while Ney Delgado, political chief of the canton, defended for the Assembly to be the one to process the amendment:” … this is going to legitimately transform more and better rights, you can not ask us to forget the historical necessity of confronting these corrupt bankers that took people’s money, the amendment is to say no more to the past … “said .

Guillermo Lasso intervention provoked shouts of the bars. “Re-appointment, reappointment !, were the words of the people of AP, while people of CREO stated” We want a referendum “.

“They are afraid to hear that those corrupt bankers to which you refer are in two places, some live in Miami and other work for this government (…) the ones from Miami they offered to bring them and none has yet come; and those who worked in the government they let them flee to Miami, “Lasso said.