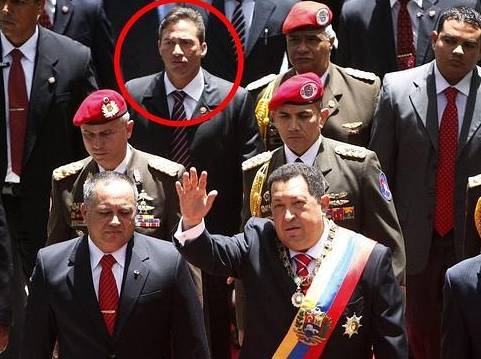 Leamsy Salazar, in the third row (behind Diosdado Cabello and Hugo Chavez), on the day of Independence of Venezuela in 2012. EFE

Venezuelan officials confirmed on Tuesday the defection of a former bodyguard of Diosdado Cabello, president of the Venezuelan National Assembly, which according intentional means implies the official in a drug trafficking network.

“Defected in the month of December the Armed Forces and is listed in the US as protected to defame, abuse and try to submit to public ridicule to the president of the National Assembly witness” said lawmaker Pedro Carreño, surrounded by other Chavista assemblymen .

The Spanish newspaper ABC and The New Herald, based in Miami, reported that Leamsy Salazar, Cabello’s former security chief, had fled and was working with US authorities in investigating allegations about involvement in drug trafficking of Venezuelan officials.

The article, citing unidentified sources close to the investigation in the US, says that Salazar, who apparently worked for the deceased Hugo Chavez for nearly a decade, has evidence on Cabello’s role of head as “Cartel de los Soles” allegedly composed by the military.

From the Venezuelan government has repeatedly denied accusations that such cartel exists and demanded that the evidence be displayed.