Deficit of the balance of payments is $ 1,238 million 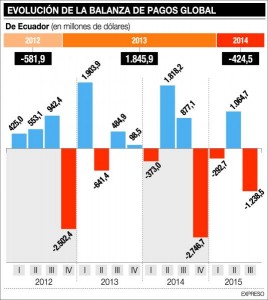 All accounts of Ecuador are summarized into one: the Balance of Payments (BP). This sheet records all transactions made by this country with the world.
For example: the quantity of goods and services sold by Ecuadorians to other countries; how much investment came in and how much came out; or how many remittances landed and how many emigrated.

For a dollarized country, like Ecuador, that is the main account, closely monitored, since it reflects the flow of currency required by a system -that does not print its own currency but rather “imports it”- this records a surplus or a negative balance. While there are surpluses, there will be more money at home to fund the dynamics of the economy.

In the case of Ecuador, according to the Central Bank (BCE for its Spanish acronym), the BP had a deficit only in the third quarter of 2015, of 1,238 million dollars: that is, the deficit was recorded in the current account as in the capital account. However, when the first three quarters are added up, the red balance narrows to $ 466 million, that because there was a surplus of $ 1,060 million in the second quarter. (I)

Corn yield has doubled in 5 years