The deceased would have been located in the front of the Latam aircraft, whose destination was New York, USA. The passenger terminal stopped the activities for almost two hours while police tests were carried out.

Two people were found dead on the runway at the José Joaquín de Olmedo airport in Guayaquil yesterday. The deceased would have been hiding in the landing gear of the Latam aircraft that served the Lima-Guayaquil-New York route.

Due to this incident with flight XL1438, the airport paralyzed its activities from 09:20 to 10:55 approximately. The pilots of the aircraft were contacted to return to Guayaquil and contribute to the investigation of the incident, said the prosecutor Germán Bustamante.

The official commented that it will be verified if the deceased were the only people hidden. The commander of the Police, Marcelo Tobar, confirmed the death of the two people at the Guayaquil airport.

Tobar reported that the victims were placed in the landing gear of the commercial flight that departed according to their itinerary at 09:01. “It is necessary to determine if the same system expelled them or if they launched regretful to make an illegal trip,” said the official.

The citizen Rumiñahui Ortiz mentioned that he was one of the first to arrive at the outskirts of the terminal and see the bodies of the two people on the runway at 09:00.

Ortiz said that some inhabitants of the citadel, the FAE, said that the incident occurred when the aircraft took off from the runway. The citizen said that the bodies, which were about 100 meters away from each other, carried a suitcase that also fell a short distance from them.

Criminalistics personnel carried out the removal of the corpses and collected information from the site where the bodies were found. The first agent of the Guayaquil Municipal Transit Authority (ATM) to arrive at the scene of the tragedy was Lieutenant Héctor Lago.

The official indicated that the ECU-911 was alerted of the situation by the calls of the neighbors of the FAE citadel, north of Guayaquil. “They told me that the plane had just taken off and was not going too high when they saw the two people fall,” recalled Lago, who arrived at the site at 09:30. In the social network of Twitter, the user @ MataJose1 affirmed that he saw the two people fall from the plane.

While the General Directorate of Civil Aviation (DGAC) reported that due to the fact the Emergency Operations Center (COE) was installed in which representatives of the concessionaire of the Guayaquil air terminal (Tagsa) also participate. The bodies were transferred to the morgue for the autopsy of rigor. The Persons and Guarantees Unit of the Guayas Prosecutor’s Office does not rule out that the deceased, not yet identified, have embarked in Lima, Peru

The Boeing 767 aircraft fly between 30,000 and 40,000 feet in height where the amount of oxygen is almost zero and with a temperature below 50 degrees Celsius. “These conditions make the survival of a human being very complicated,” explained a Civil Aviation technician who preferred to omit his name.

The aircraft inside has a pressurization system (active pumping of compressed air) which allows the habitability of the occupants. A study by the Federal Aviation Administration of the USA He found 10 cases of stowaways from 1947 to 1993. These people traveled at altitudes of 39,000 feet. Of this group, five survived. These conditions put in a state of virtual ‘hibernation’, according to the report. (I) 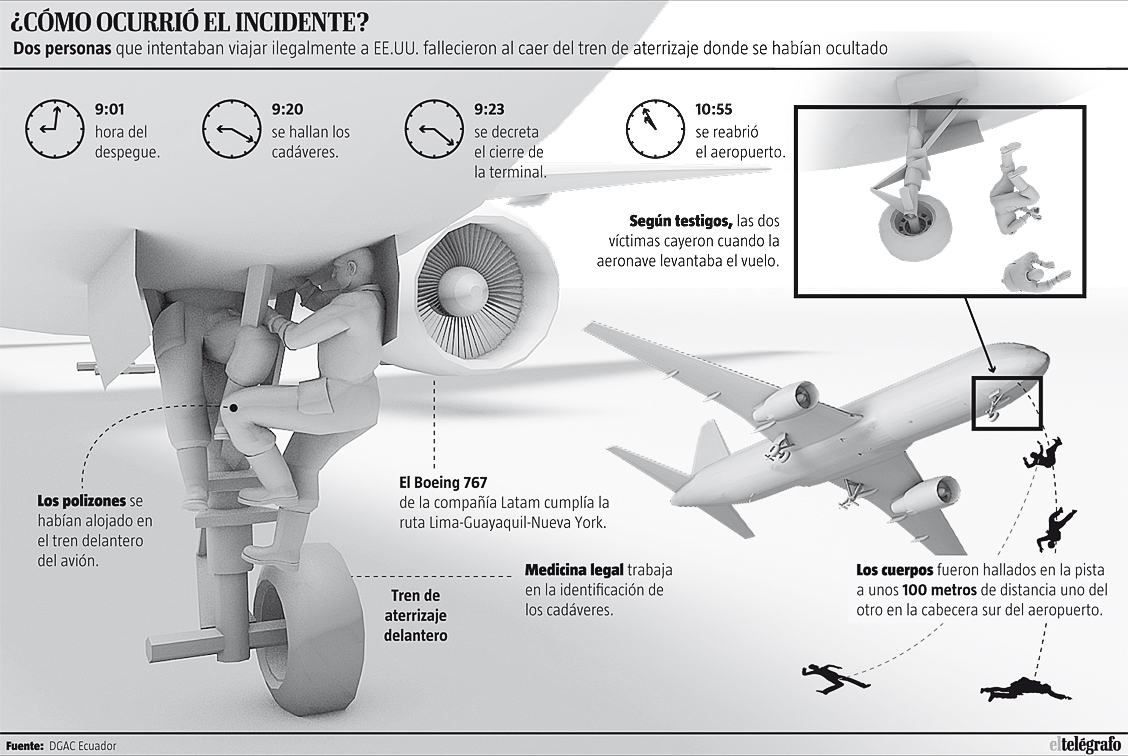